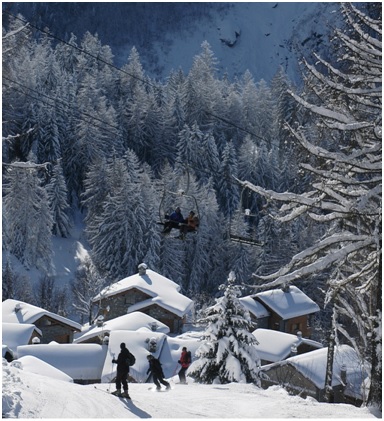 …is often described as the ‘jewel of the French Alps’, in fact The Sunday Times liked it so much they placed the resort in first place in their feature article called the ‘World’s Best Family Ski Resorts’, but why?

There are 41km of piste runs; two green, six blue, eleven red and four black runs. But the real secret is this: the whole mountain is ‘skiable’, even if you’re not an off-piste skier.

There are six ski hire shops, all within 5 minutes’ walk of each other. This is great for anyone needing to hire gear for the holiday with easy pick up and return. Sainte Foy also has a patisserie, two mini markets, a pharmacy and newspaper shop – what more do you need?

Saint Foy is a small compact resort, this means you avoid long lift queues and getting cut up by other skiers coming at you from every direction. You can enjoy more time on the peaceful slopes or making the most of the deep off-piste powder.

Sainte Foy Tarentaise is a very environmentally friendly resort. The ‘piste basher’ snow grooming vehicles are all run on bio-degradable fuel such as vegetable oil rather than diesel. There are 23 environmentally friendly snow canons that each produce 120 square metres of snow an hour, that’s enough to cover over four-and-a-half hectares.  There are also over one hundred locals who volunteer to comb the mountain at the end of each ski season, picking up and recycling nearly 30 tons of litter.

For off-piste lovers, there is access to the world-famous north face of the La Fogliettaz from the top chair lift. Sainte Foy Tarentaise offers some of the best off-piste skiing you could ask for, with the opportunity to enjoy 1700m of powder and no need for a helicopter! What’s even better is that it’s north-west facing, keeping that all-important and much loved powder on the mountains for days.

There are five restaurants on the mountain and a further nine in and local to the resort. There are also an additional seven bars (many serving food and snacks). Sainte Foy Tarentaise is a small resort, meaning no more wasting time in the huge queues for food and more time on the slopes!

Although Sainte Foy has it’s fantastic off-piste skiing, it is a great family friendly resort. There is lots of skiing suitable for the whole family, ski schools & childcare. Venture Ski offer in-chalet childcare services as well as the crèche, exclusively for their clients.

The community of Sainte Foy has planted over 3800 trees in recent years, not only benefiting the environment but also making the surroundings even more picturesque. A small lake was also built to collect rainwater and supply water for herds of cattle that graze on the summer meadows.  Stretching from 1500m to 2900m, the skiable terrain stretches right through the tree-line, creating some of the best off-piste “tree-runs” in the world and some lovely picturesque pistes as well.  The writer has skied round a quiet corner to surprise both herself and a wandering deer at the same time.

You will love Sainte Foy. Don’t just take our word for it, ask anyone who’s visited Sainte Foy if they’ll now ski anywhere else and the answer will most likely be “no”. Once you have been to the small, peaceful village with its picturesque surroundings and experienced the exceptional off-piste skiing, you won’t want to go anywhere else.

What you need to know…

Summer in the Alps

Take a look at a stress free summer holiday in Sainte Foy, whether you are looking for peace and quiet, or action and adventure, you can find it all here: www.venturesun.co.uk